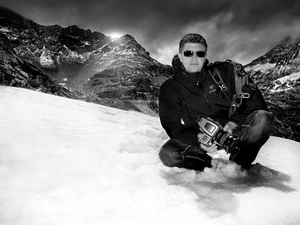 Photographer Tim Wallace is the driving force and creative thinking behind Ambient Life. An award winning photographer his work is often described as both conceptual and dramatic.

Tim works internationally with many high end brands and clients such as Aston, Land Rover Jaguar and Morgan in the UK to Kenwood and Audi in the US.

His work has been published globally and has been showcased in the infamous 'Victor' Book, a industry Worldwide and highly acclaimed industry leading magazine. He was recently named by as one of the UK's most creative photographers whilst in the US Scott Kelby described Tim recently as one of the Ten most influential photographers in the World today, Tim's view is a little more straight forward, a man who's known for his down to earth attitude, his feet are firmly on the ground and his desire to produce creative work is one that he has been driven to from a very young age when he first picked up a camera, "Photography is for me simply a creative passion, the ability to use light and form to capture in a single image what I see in my own imagination..."

"I'm 40 but apparently 40 is the new 30 so things are always good and I have never felt better!, I don't sleep much because I'm always thinking about what I can do to create something new, on a morning I often wake up excited for the day like a kid at Christmas just wanting to get out on the road and get on with it. People say I have a wicked sense of humour, not sure on that one, maybe its just a defence mechanism for the fact I'm always trying to lose weight but enjoy good food too much...!

"  I love the whole creative visual voodoo, the journey from A to B and the chance of arriving at C

"My work is often regarded as conceptual and dramatic and to me photography is a process, you'll never hear me mutter 'it'll be fine' as that's simply not enough for me. Life is short and I aim to make mine worth while and interesting with work that I hope reflects this.  My goal in life is to be myself always, be creative, be true and most of all improve just a little part of peoples lives with images that both entertain and sometimes invoke the feelings that I had when I shot them. I've won awards and I'm always of the thought that maybe they got the wrong Tim Wallace, hey I'm grateful always but never take myself or any achievements too seriously, life's too short and people will forget you quickly.  I jumped off a cliff in Norway a few years ago in a BASE jump, why?, well because it felt right for me to do that for myself at that time, I truly believe that anything in life is possible, work hard, be an honest person, tell the people that you love just what they mean to you as often as you can, and most of all be out there shooting because sometimes that's where amazing things can happen.”

All Work by Tim Wallace